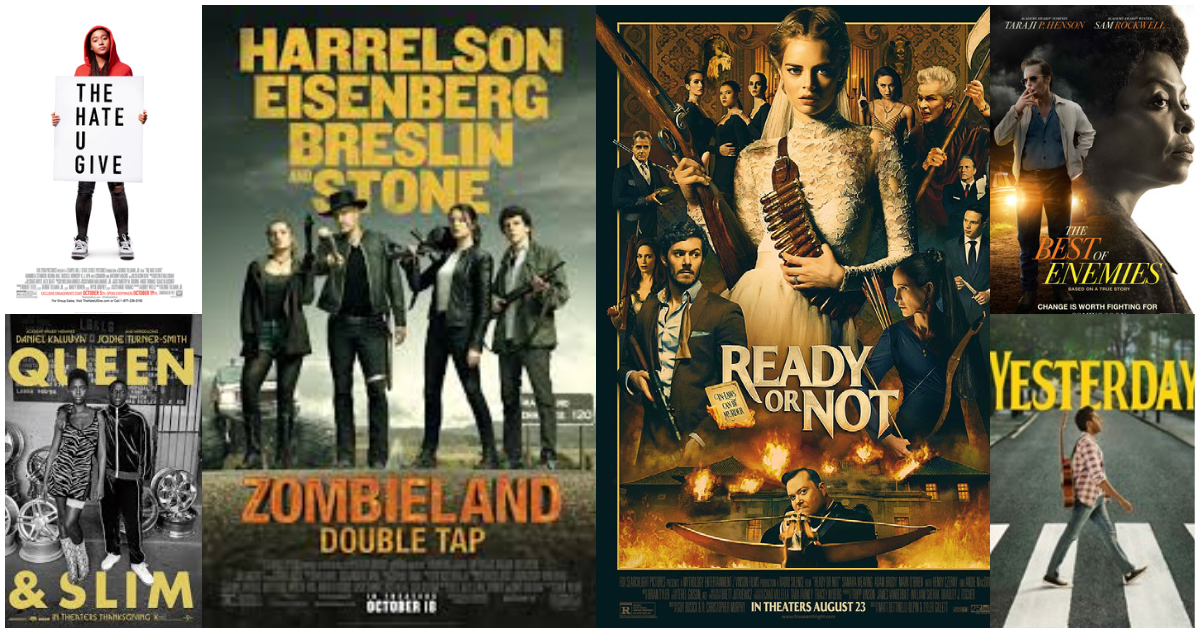 We lost the ability to do a lot of activities in 2020, one of which was a favorite of mine – going to the movie theater to see the latest blockbuster. I was only able to see three movies in an actual theater, for the rest I had to resort to streaming services which was ultimately fine because I got to watch the movies I missed while they were released. It was also nice to just curl up on the couch with my dog and not worry about people talking or being on their phones in the middle of a film. Although I will be extremely happy once it’s really safe to back to the theater and enjoy a large bucket of popcorn.

Out of the movies I was able to consume in the last year I was honestly surprised that Harley Quinn: Birds of Prey was my favorite. I was so reluctant to watch it because I was a bit disappointed that the Joker wasn’t going to be featured but it was far better than expected. I even purchased to soundtrack. Margot Robbie does such a great job capturing Harley’s erratic yet bubbly personality and the heartbreak that she goes through that could cause any woman to go crazy. The film is a bit unique too because of the sheer amount of girl power surrounding it, and the teaming up of heroes, villains, and vigilantes. Ultimately I’m glad I gave this movie a chance.

I don’t really think I watched anything this year and truly disliked it. I was a bit underwhelmed by A Silent Voice after being pressured into watching it because of how sad it’s supposed to be. The movie is definitely highly successful for it’s beautiful animation and rawness for dealing with mental health but I didn’t have as much of a visceral reaction as others who told me to watch it. I didn’t cry at all but I definitely felt the sadness and hardship from the two main characters and I’d still recommend it to others.

As I said earlier, I’ll be very happy to start going back to the movie theaters once it’s entirely safe to do so, but the absence of that experience won’t stop me from enjoying movies. I’m patiently waiting for several to come out this year and I’m sure I’ll find some movies from years past to get into. Hope everyone out there has a better year than the one we just went through!

It’s no secret that I’m a Disney fanatic. I loved Disney movies during my childhood but I’ve learned to appreciate, respect, and love them even deeper in my adulthood. Possibly because much like Peter Pan, I never want to grow up. Not only do I love Disney movies, but I love education and I’m grateful I attended college (and graduated!). Although my major and career choices are in English and Creative Writing, the couple of psychology courses I took during my four years really opened my eyes. I took a basic entry level course and a class entirely about personality. The personality course was completely fascinating and highly enjoyable. So how do Disney and psychology come together? Disney/Pixar created Inside Out.

I didn’t see the movie until just about a week ago on one of my days off. Two of my close friends are psychology majors and said they really liked the movie and it definitely did a great job on connecting the psychology of personalities into each character. I have to say I agree. Even though the different emotions are introduced fairly quickly, the order of appearance in accordance to Riley’s psyche make total sense. Joy plays a huge part in the first few years of our lives, followed by Sadness, Fear, Anger, and Disgust. Each emotion creates a part of Riley and her personality which are shown as different islands in the protagonists mind. Memory recall also appears more than once within the movie, and of course we are always remembering things.

The biggest focus and plot of the movie is on Riley and her family moving from Minnesota to California. All of her emotions stay intact along the journey but are disrupted upon arrival and the start of a new school. Joy and Sadness are sucked up into a tube and transported to Riley’s long term memory, leaving Anger, Fear, and Disgust to try to take Joy’s place. It doesn’t go well and ultimately they give Riley the idea that she should run away back to Minnesota. During this time, Riley’s islands of personality begin to crumble and fall into the abyss of forgotten memories. Eventually Joy and Sadness make their way back to the headquarters of Riley’s brain with her other emotions and rectify the problem by realizing that some of Riley’s memories were created and felt by more than just one emotion. In the end, the orbs that represent Riley’s memories are multicolored to show how we sometimes feel fear and anger in a situation and sadness and disgust in another. We can’t express just one emotion at one time. They all work together.

Inside Out was definitely a well planned film for the Disney franchise and I applaud the different educational aspects put into it. It’s of course humorous and I believe can be enjoyed by any age group. For those of you who are psychology buffs, I’d suggest this movie but I would also love to know if you’ve seen it and what your thoughts are, is it accurate?

I do hope Disney continues to create movies that teach us something other than bravery or love or tolerance. I hope we start to see more movies about psychology or science or technology, but with the genius of animation and a creative story behind it. Inside Out definitely is a great start in that direction.

In 2010, Emma Donoghue published the gripping novel Room in which a five year old boy tells a gripping story of being born into a captive situation. His mother, referred to as Ma, was abducted at 17 and became pregnant with her captor’s child, Jack, who the novel is narrated by. I read the novel about two years ago and was completely enticed by it. It was emotional in every way, but the ending left me completely satisfied. Some novels often leave me wanting more, which is of course good, but it means they also feel incomplete; Room was not at all like that.

Flash forward to the night of the Golden Globes just a couple of weeks ago. I was watching with my family and all of a sudden there was a nomination for a movie called Room and a clip of moments from the movie. I was completely elated that one of my favorite novels was transformed into a movie. I’m not entirely sure as to why, I know how often movie adaptations of novels can end terribly. But I had high hopes and I ended up watching it just a couple of nights after the Globes. I was not disappointed.

This movie really did capture the book quite well and played out some of the most important parts to their fullest. Jack’s five year birthday; Ma’s bad tooth; their tries to escape and the outcome of their plans. Of course, the rest of the movies follows Ma and Jack’s entry back into society in two very different ways. Ma, having already lived in the world for 17 years is extremely happy to be freed. For Jack it is very different. He’s never experienced the world outside of the shed in which he’s lived his entire life. When the plan to escape comes around and Jack is about to execute the plan he’s in complete awe when he looks up at the sky. It’s entirely new.

Brie Larson does a fabulous job playing Ma’s character especially once the mother and son are free. She plays to the happiness and relief one feels after being held captive for so long but she also shows us the frustration of coping with the fact that life did go on in her absence. Her parents divorced and her mother found someone new; her father can’t stand to look or speak to Jack knowing he was born to Ma’s captor. After a stressful TV interview in which the interviewer asks Ma why she never wanted to get rid of Jack and insinuating that Jack’s father is actually a father, Ma attempts suicide by overdose. She recovers and comes back to her son, ready to start a new life.

Jacob Tremblay also does a fantastic job of playing little Jack. He gets angry at Ma when she reveals that the world doesn’t exist just within the box of the TV, it’s real and it’s just outside the four walls they are confined in. He goes back and forth on wanting to get out of room, mostly fearing the world he’s never known. When the plan works, Jack is quiet and reserved because he’s only ever seen his mother and all these other people existed in the unknown. Jack remains standoffish and scared during most of their release. After his mother’s suicide attempt Jack starts to open up, he tells his grandmother that he loves her. He gains a friend in the neighborhood, he helps around the house, plays with the dog. He also opens up about his life inside of room. It’s all filled with the emotion only a child can have – raw and honest.

I really enjoyed seeing this movie played out with such great detail to the book it came from. The only thing I wished was different was that I wanted more of Ma and Jack’s life inside of room. Just a few more snippets. Anyone looking for a good drama, either in a book or movie I would highly recommend Room in both forms.